The day started with a drive to the Big Sur Bakery and Cafe, a place I had always wanted to visit, ever since having purchased the cookbook a couple years ago.
I was fascinated by the setting, the food, and the people described.  We arrived and were told the only food available was in the pastry case, so we stood in line and purchased some pastries, a chard quiche and a berry ricotta pastry.  The cashier asked it I wanted it warmed up (like I would eat it cold?)  It was dim and drafty inside and we were found a table near a sliver of sunlight.  We were completely underwhelmed.
I still love the cookbook, though.
After a nice hike to the waterfall at the Pfeiffer State Park, and a stop at the Coast Gallery where I found the most unusual business card holder made of ebony and walnut,  we drove through Big Sur, stopping at Ventana Inn to check out their restaurant (they wouldn’t let us in), by the Post Ranch Inn (they wouldn’t let us in there either unless we had a reservation at the restaurant) and then to Nepenthe, another famous spot, (and another cookbook I own).

Yo had mentioned that Post Ranch Inn had a fabulous restaurant called Sierra Mar and while we were in Nepenthe I spotted a thick cookbook called Sierra Mar.  The photos in the book were eye popping, brilliant, unique and appealing.  I knew that is where we needed to go. 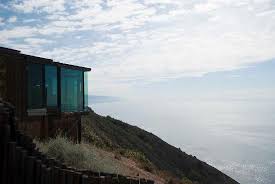 What a beautiful place! The restaurant is perched over a cliff overlooking the ocean. All the tables have a view out the window, however the day we were there the fog obscured the view somewhat, but it was still unreal.  A glass of champagne, some wagyu carpaccchio and being in one of the most spectacular places in  the world.  What more could you ask?  ﻿﻿﻿﻿﻿﻿﻿﻿﻿﻿﻿﻿﻿﻿﻿﻿﻿﻿﻿﻿﻿﻿﻿﻿

﻿Although I said I wasn’t too fond of beets, the Beet and Baked Goat Cheese with Pistachios changed my mind. The beets were so fresh, tender, and flavorful and combined with the sauce, crunchy pistachios and tangy goat cheese I could not believe how much I was enjoying a beet dish.  I looked for this dish in the Sierra Mar cookbook but did not find it.
﻿ ﻿  We had a delicious Heirloom Tomato Soup, Seared Ahi Tuna with Salad Greens and Won Tons and last but not least, my favorite, Creme Fraiche Cheesecake with Candied Zest, Berries and Berry Sauce.

The cheesecake was so light﻿ and I could tell this fruit was so fresh and at its peak.  The combination of orange and berries was just perfect.
We left having experienced a one of a kind restaurant.  I love Big Sur!

So enjoyed my vegan street tacos from Mariachi's D

Finally did a video of Hippie Banana Bread. It’s

Hummus made from dried chickpeas is my best hummus

This Korean Bibimbap (rice with toppings) is out o

Don’t miss this Zoom class. Link in profile to m