I am in New Orleans for a Public Health Service conference. I’ve been here since Monday and spent the last 4 days in meetings so not much of a chance to see New Orleans.

The Sheraton food has been barely edible mostly. Feeding 700 people usually means typical convention food and they decided to have cold everything. I did enjoy a cup of potato leek soup on Monday, and the redfish at the formal dinner Monday night tasted pretty good, but I really wanted to try some of the famous New Orleans cuisine. On Tuesday night a group of us headed out to the Bourbon House. I had some really good heirloom tomatoes for an appetizer and the redfish on the half shell with grilled shrimp was good, although not that memorable. The Acme Oyster House next door has a line of people waiting to get in but the Bourbon House was not very busy. The next day I had some free time at lunch and walked over to the Napoleon House cafe at 500 Charles St. in the historic Napoleon House. I had a quarter of a muffaletta and some jambalaya. OK, but not that good. Cold jambalaya and fairly bland muffaletta.
By this time I was getting discouraged about New Orleans food but I was hopeful about dinner at K Paul’s once Steve arrived Wednesday night. We had a reservation, a good thing because they were packed. I liked the warm, inviting restaurant, with large posters of their recipes on the wall and pieces of paper on the table with recipes.

We had the special K Paul’s cosmopolitans, a very nice drink. Their bread basket contained jalapeño yeast rolls, corn muffins, molasses muffins, and dinner rolls. All were so fresh and delicious. I had some gumbo, fair, nothing special. Steve ordered a special that came with a shrimp enchilada appetizer. That sounded strange but it was really good. Very fresh, perfect shrimp in a tortilla in a beef chili sauce with melted cheese. I tasted it to be polite but wanted more. Steve had a pan fried flounder with an Indian bayou sauce. From what I could tell the sauce had curry, tomato, corn, and shrimp. It was perfectly cooked fish and the sauce complimented it well. I ordered the blackened drum. Not bad, but not great either. A little over salted for my taste.
﻿
﻿﻿﻿
﻿﻿
﻿﻿  Steve was nice enough to give me more of his fish! His dinner came with dessert so he ordered chocolate tart. That was a very nice chocolate tart. What I liked about it was that it looked homemade, not a perfect pastry shipped in from somewhere. Although we were so stuffed we couldn’t stop eating the dessert. We waddled out of K Paul’s and headed to Bourbon Street to walk off some calories. As we were walking we heard some really good music coming for a club, Fat Catz. We stopped in and ended up staying for over 2 hours listening to great rhythm and blues from the last 50 years. This group, the Cannection, was really good. Back at the hotel running through a sudden downpour, drenched, but feeling good.
Thursday was the last day of the conference so I had to attend meetings until lunch time. We ventured out to walk around and sightsee. Someone at work recommended Mother’s on Poydras so we headed there to have a sandwich. A popular place, big line and full of people, Mother’s has been around since 1938 and is known for “world’s best baked ham”. We had shrimp and oyster po boys. Probably should have gotten the “famous ferdi special” with ham, roast beef, debris and gravy, but our po boys were pretty good and just what we needed to start the day.

We walked for hours, stopped at the corner of Royal and Toulouse for a long time to listen to a man playing the saxophone.

It was unexpectedly beautiful music and I couldn’t tear myself away. I have been so impressed with the music here. Our PHS dinner has an excellent local band and people stayed on to dance, a very unusual occurrence with our group.
After a rest break and workout at the gym, we left for dinner at Brennan’s. I had to try Brennan’s after my culinary school experience. Many of Brennan’s dishes were in our textbook and I once had the assignment to make and serve Bananas Foster table side to the instructors. That was nerve wracking, to say the least! I’ve always heard good things about Brennan’s so I was looking forward to the dinner. They have an extensive wine list and menu. We ordered on the a la carte menu rather than the 4 course “prix fixe” menu. We couldn’t stand the thought of having 4 courses each–way too much food. I wanted to try the famous shrimp remoulade that I had been seeing on all the menus. Steve ordered the salad with blue cheese and spiced pecans. I did not like the shrimp! My idea of remoulade was a creamy sauce but this version was very sharp, lots of horseradish and mustard. I was thinking bad thoughts about Brennan’s until my entree appeared. After 4 days of redfish I ordered a pepper filet and barbeque shrimp. The filet was perfectly cooked and had some really tasty pepper cream sauce on it. There were some cream mashed potatoes and steamed vegetables on the plate. The bbq shrimp, a New Orleans style dish of shrimp in a spicy sauce, was fabulous. Steve’s redfish Perez, redfish with a crab and shrimp topping, was also outstanding. The food was served on very hot plates and stayed piping hot throughout the meal and I like my food to be hot.

For wine, Steve had a glass of Acacia Chardonnay and I had a glass of a Napa cabernet, can’t remember the name. Next time we’ll read up on their wines. I learned that Brennan’s wine cellar has over 35,000 wines and a 56 page wine list.
We ended with the Bananas Foster and watched our server prepare it for us. It was just as I remembered it, caramelized bananas with rum and brown sugar sauce on top of vanilla ice cream.
﻿﻿
﻿﻿

Our plan to head back to Bourbon Street for more music was changed due to a heavy rain. We’ll try tomorrow night.
Our plans for Friday include breakfast at Cafe Du Monde for beignets and cafe au lait, a street car ride to St. Charles St., lunch at Central Grocery (muffulettas), shopping and site seeing, and dinner at John Besh’s August restaurant. (and another work out at the gym).
By the way, if Sandra, my personal trainer is reading this, I worked out at the gym every day, Monday-Friday, for at least 1 hour!

Friday morning we set out for Cafe Du Monde, the original location on Decatur Street, for some beignets and cafe au lait. There was a long line but it moved quickly. Our beignets were hot, chewy, and delicious and the coffee was just right.

The atmosphere was very noisy and busy so the enjoyment was lessened by the crowds. Next time I would go there late at night or very early. They are open 24 hours a day so it shouldn’t be hard to find a better time.

We planned to go to Central Grocery for a muffuleta so we had to walk around a few hours to work off the beignets. New Orleans is very humid! After a short time of walking around it feels like you’ve been at the gym and my hair frizzed up immediately every time I walked out the door. We waited in line again for a muffuleta but it was worth it. The Central Grocery has been open since 1906 when the family who started it sold food from their native country, Italy, Sicily, to be exact. They wanted to have something that a workman could take with him that had the tastes of home–the meats, cheeses, and olives, which are prized in Sicily.
The muffuletta became the perfect combination. We ordered a whole muffuletta, but should have ordered a half because it was huge. The olive salad was chunky, fresh, and flavored nicely.

The bread was crusty, chewy, with sesame seeds and great flavor. I ate way more of it than I intended but didn’t reget it. I loved the fact the store was so old and everything in it was imported from Italy.

We had a reservation at August, John Besh’s restaurant on Tchoupitoulas St. What a beautiful restaurant! Very elegant and quiet with gorgeous design and lovely furniture. Flowers, champagne chilling in a silver bucket, tuxedoed waiters, and well dressed patrons. The menu was full of interesting dishes and not at all the usual New Orleans fare. We were served house made sourdough bread with hand churned creamy butter, the care and attention to even that detail was impressive. 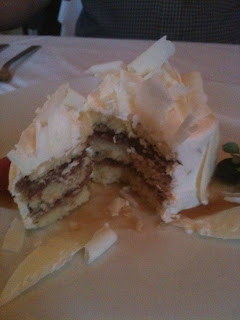 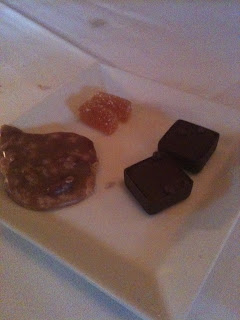 If you have the chance, don’t miss August. The attention to detail, freshness of the food and the atmosphere are all impeccable.

Our last eating experience was Saturday at the Cooking School of New Orleans where we took a “class” on how to make gumbo, jambalaya, bread pudding and pralines. It was fun because the chef instructor, Big Kevin, was a hoot. 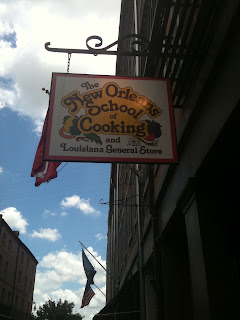 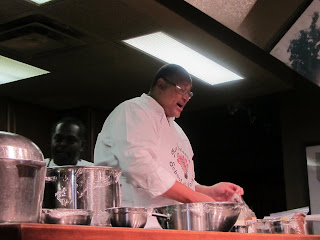 He had a wise crack for every one and he didn’t tae himself or cooking too seriously. I liked his tips on roux making and his version of bread pudding, although I wouldn’t make it with Pina Colada mix like he did–way too sweet, but I liked his technique. He gave some good advice on how to layer flavor and how to alter the recipes to make them unique. Although I’ve made gumbo and jambalaya many times it was still good to learn how the locals do it. We had a great lunch as well, a good ending to our trip. 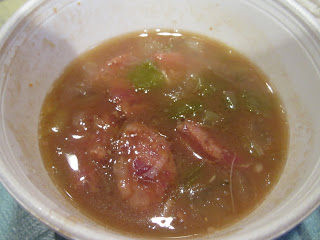 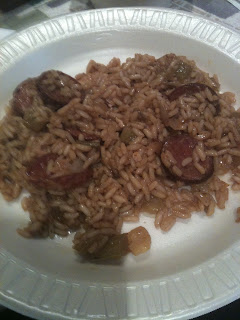 Anyone make waffles today? This is the last of th

It’s Day 9! Who is still with me on the #chefju

A sampling of the salads from my Plant-Based Super

Comfort food for me is Japanese rice cooked in my

Savory Herb muffins with black quinoa on the menu