Blog
You are here: Home / Blog / Uncategorized / Minnesota Food
I went on a trip this week for my social work job.  I visited a prison in Waseca, Minnesota.  Waseca is about an hour and a half south of Minneapolis.  Going there in February was a bit of a a challenge with the weather being very cold with a high chance of snow and ice so I was a little anxious.  Fortunately the weather was not so bad and the roads were clear. 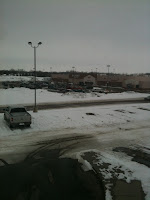 My hotel, Crossings by Grandstay, was situated at the edge of town with a direct view of Walmart.
I am not a lover of Walmart, by the way, but in case I needed some winter supplies I guess it would come in handy.  Turns out I needed a window scraper when there was a coating of ice on my rental car the next morning.﻿
Where to eat dinner?  Not too many restaurants in the town of Waseca, population under 28,000, but there were 3 or 4 not-chain restaurants.  I ended up at the Boat House, a pleasant looking rustic place situated on a frozen lake, but open in the winter.  There were several soups of the day:  beer cheese, wild rice and chicken, chili, etc.  I knew from prior discussions and teasing a woman a work from Minnesota about the “cuisine” of Minnesota that their wild rice soup is quite popular so that’s what I had, along with a “paddle burger” (like a patty melt). ﻿
﻿
﻿ The soup was delicious.  I was pleasantly surprised at how flavorful and fresh it tasted.  The waitress told me she made the soup that day and she was proud of it.  The burger was fine, but just meat, cheese, and bread with not a vegetable in sight.
﻿﻿﻿﻿
The next day I visited the women’s prison, Federal Correctional Institute, and met with the social worker, the big wigs, and various staff.  They were a friendly and welcoming bunch and I had a great time.  For lunch we went to the food services at the prison and had the staff lunch.  It was predictably all “brown food”, like the movie Fargo when they eat at a buffet and everyone piles their plates with potatoes, meat, gravy, bread.
There were vats of steak in gravy, chicken baked to death, gray green beans, and unidentifiable meat and starchy foods.  I had a plate of baked chicken, rice and green beans and it was not too bad.
I had asked about restaurants recommendations early in the day and later in the afternoon the social worker, Barb, and psychology secretary, Nancy, said they would join me at the Starfire Grill.  This was the nicest restaurant in town and supposed to be very good.  I was very pleased that they wanted to hang out with me. Typically on these business trips to prisons I’ve found the staff disappear at night to their own routines and don’t really want to entertain the visiting person, but I think the Minnesotans are just friendly, nice people.
The Starfire Grill (Restaurant) was pretty, new, and nicely decorated.  A nice glass of cabernet, and good company was just the thing on a cold winter night.  Nancy raved about the lamb chops and loved hers.  I ordered the filet mignon with bearnaise sauce.  The first steak they brought was well done so I sent it back.  The second one was very medium rare but I ate most of it.  It lacked flavor and was not helped by the little plastic cup of watery bearnaise sauce.  Steak is not the thing to order there and I should have had the famous fish of the area, “walleye”, something I saw on every menu.  Since my dinner was disappointing I decided to treat myself to dessert.  Barb and Nancy shared chocolate silk pie and I had chocolate peanut butter pie.
Both pies were fanstastic.  Their pie had the melt in your mouth rich chocolate goodness and the crust had some crunchy bits of sugar.  Mine was a light peanut butter mousse with layers of melted chocolate.  I ate part of it and took the rest with me, glad that my hotel room had a refrigerator.  My plan earlier in the week, to eat “healthy” during this trip, was rapidly falling by the wayside in this rich and hearty food land.  I put  the piece of pie next to my containers of Greek yogurt and smiled.  A few hours later it was my midnight snack.
On Thursday I made an unexpected trip to Rochester, an hour east of Waseca, to see my social work friends there.  We visited for a while and went to lunch at Brothers Grill, a local place.  The original plan that day had been to go to a Waseca cafe and have the famous, “roast beef commercial” sandwich.  Don’t ask me why they call it that, but Nancy described it as a hot roast beef sandwich with gravy and hashbrowns.
Since I was not able to go to that place when I saw, “hot roast beef sandwich” on the Brothers menu I ordered it.  It was seriously good with tender roast beef, silky mashed potatoes, thick bread, and a light and tasty gravy.  It was a plate of brown food, again.  I tried to leave most of the bread but I ate way too much of the gravy covered beef and potatoes.  This is not the type of food I usually eat and I was feeling very overstuffed.  A green salad was starting to sound better and better.
I made my last trip to the prison Friday morning and got ready for my return to the airport.  I decided to stop at the Pheasant Cafe for breakfast.  This place was what you would find in so many small towns in America and a step back in time.  Counter stools, booths, a group of retired men meeting for their daily coffee, and a simple menu. 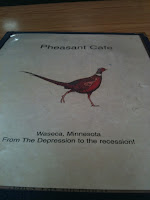 I had been eating the “continental” breakfast at the hotel the last couple days so a hot breakfast sounded great.  I ordered bacon and eggs and my plate arrived with perfectly cooked eggs, crispy bacon and a huge pile of crispy hashbrowns.  The wheat toast was soaked with butter.  For something so simple, the breakfast was delicious, classic, and satisfying.  I really liked this place!
﻿﻿﻿ ﻿﻿﻿
Time to head back to the airport.  I was a little nervous about taking all the right roads back to the airport but I had a map and GPS so it wasn’t so bad.  I had some time to kill before my flight and had to have lunch.
Airport restaurants are usually not so good but I spotted one called, French Meadow, known for fresh, organic food.  I ordered a salad!  Finally, green food.  The salad was crispy letttuce, roasted tomatoes, Kalamata olives, cucumbers, peppers, red onions, and lemon vinaigrette.  Wow, I didn’t realize how much I missed vegetables.  The Thai vegetable soup was fair but not as good as the wild rice chicken soup earlier in the week.  I was ready to get on the plane and head back to Texas.
February 26, 2011/by Julia Dunaway
https://chef-julia.com/wp-content/uploads/2016/03/chef-julia-logo-400x311-copy.png 0 0 Julia Dunaway https://chef-julia.com/wp-content/uploads/2016/03/chef-julia-logo-400x311-copy.png Julia Dunaway2011-02-26 13:50:002016-02-23 05:20:12Minnesota Food

Anyone make waffles today? This is the last of th

It’s Day 9! Who is still with me on the #chefju

A sampling of the salads from my Plant-Based Super

Comfort food for me is Japanese rice cooked in my